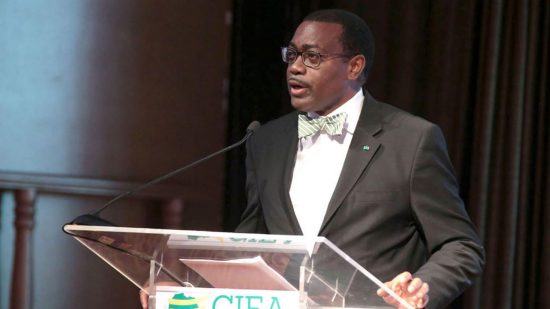 African leaders on Tuesday reaffirmed their support for the African Development Bank Group and its leadership under Dr. Akinwumi Adesina as he begins his second five-year term with a renewed mandate to foster sustainable development on the continent.

In goodwill messages to mark Adesina’s inauguration, Presidents Muhammadu Buhari of Nigeria, Paul Kagame of Rwanda, Alpha Conde of Guinea, George Weah of Liberia, President Sassou Nguesso of Republic of the Congo  and Guinea Bissau’s Umaro Embalo, commended the Bank’s interventions, especially its assistance to member states in the wake of the COVID-19 pandemic.

“Dr. Adesina, you have our full support as you continue to lead the Bank through this COVID-19 period, marked by turmoil but also the prospect of new opportunities for our continent,” Kagame said, noting that the Bank had played a key role in ensuring that Africa’s interests reflected on the international agenda during the crisis.

Adesina, who first took office as the 8th elected president of the Bank Group in 2015, was unanimously reelected by the Board of Governors with a 100 percent vote at the end of the Bank’s 2020 Annual Meeting on 27 August. For the first time, the meetings were held virtually due to the restrictions imposed by the COVID-19 outbreak.

President Buhari noted that the unanimity of Adesina’s reelection was a vote of confidence in his leadership and programs, especially the Bank’s High 5 priority agenda. If diligently implemented, the High 5s will help Africa to meet most of the Sustainable Development Goals of the UN.

“Under your leadership, the Bank has made admirable progress and we are confident that this gain will be consolidated and scaled up in the next five years,” Buhari said in a message presented on his behalf by the Bank’s Governor for Nigeria.

While congratulating Adesina for his overwhelming reelection, President Conde urged him to continue to pursue the High 5s and related policies to provide jobs for the continent’s growing youth population.

President Weah pledged Liberia’s continued partnership with the Bank under Adesina’s leadership. “Dr. Adesina, your reelection signifies Africa and the world’s confidence in your leadership,” he added.

Niale Kaba, the Ivorian Minister of National Planning and the immediate past chairperson of the Bank’s Board of Governors, represented Ivorian President Alassane Ouattara, who also reaffirmed his country’s strong bond with the Bank.

There were solidarity messages also from former Nigerian President Goodluck Jonathan and former Vice President Atiku Abubakar, under whose government Adesina served as Agriculture Minister. Messages also poured in from regional bodies, including the African Union Commission, the Common Market For Eastern and Southern Africa (COMESA), ECOWAS and the New Partnership for Africa’s Development (NEPAD).

In his inaugural speech, Adesina outlined a renewed vision to build a much stronger and resilient African Development Bank Group, with the leadership and capacity to deliver greater quality impacts for Africa, while remaining financially strong and sustainable.

To achieve this, he said he would focus on building a stronger institution, strengthen human capacity, enhance effectiveness, deepen quality and impact and maintain financial sustainability.

Ghana’s Finance Minister and incoming chairman of the Board of Governors Kenneth Ofori-Atta, presided over the swearing in ceremony.