Akeredolu advices deputy, Ajayi to resign if he has honour. 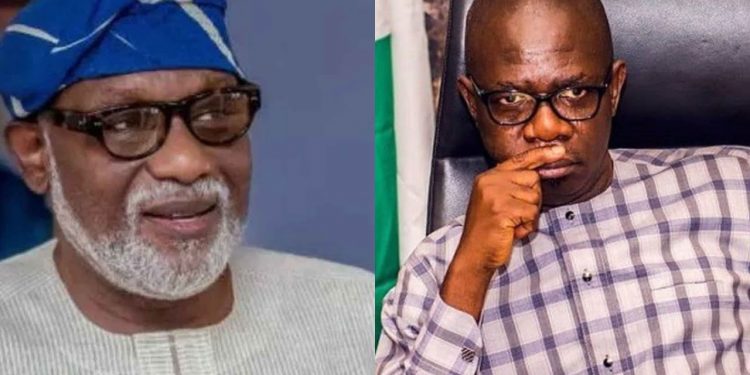 Akeredolu spoke to State House Correspondents after meeting President Muhammadu Buhari in company of other Governors of the party in the Aso Rock Presidential Villa, Abuja on Tuesday.

Ajayi dumped the All Progressive Congress (APC) under which he was elected with Akeredolu and contested the governorship under the Zenith Labour Party (ZLP) without resigning his post.

He said even if Ajayi does not resign, his days are numbered as a new administration will soon be sworn in.

The Governor also described declaration of some prominent Ondo indigenes as his enemies for life as a political statement, saying having won he has no need to keep enemies.

The Governor also noted that his victory had come to show that the ruling party, the APC, is a strong force in the country, adding that it further proved that Ondo State is different from Edo State.

“Well I am sure as journalists all of you would have watched that film, ‘Living with an Enemy’. There is a way you will live with your enemy and there is no problem.

“I have won that we have drubbed him sufficiently well, he will probably be able to come back and at least apologize for his sins, if he is contrite, there is no problem.

“God has given us victory who am I to harbour enmity against anybody? It is not necessary. So if he comes back, if he has honour anyway, he should resign and leave as Deputy Governor if he has honour.

“But if he decides not to, if opportunities are there, I am sure the party will take a decision on him because he is no longer in our party, he has gone to another party.

“So, for me, I have nothing against him but I can tell you, we will be able to live with him if he wants to remain that way.

“If he stays back in his ZLP, we will live with him. It will soon fly off, the days he is thinking that is long is not long, his days are numbered. Another journey will start in February,” he said