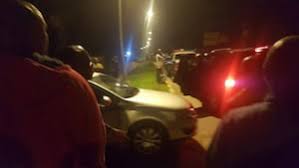 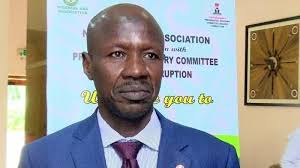 Report from a source informed us that a combined team of riot policemen and operatives of the Department of State Security (DSS) are currently searching the residences of Ibrahim Magu in the Federal Capital Territory, Abuja. According to the report, Magu’s private home in Karu, a suburb in Abuja and his official residence in highbrow Maitama are under siege by the security operatives.

Embattled Magu, is the former boss of the Economic and Financial Crimes Commission (EFCC), and is currently under suspension.

Our source quoted in the report said the operatives were detailed to conduct searches at Magu’s houses in search for evidence against the former EFCC boss. A family source and domestic staff who spoke under the condition of anonymity confirmed the raids on Magu’s houses.

“As I speak with you our men are on their way to Maitama, having finished with his house in Karu,” one of the sources said.

An earlier report by sources indicates that Magu has moved some of his personal belongings out of the headquarters of the commission. According to the report, the EFCC boss instructed his aides to remove his belongings from the EFCC facility on Tuesday, July 7 while he was on his way to the presidency for the second day of his grilling.

A source quoted in the report disclosed that the aides came to the EFCC headquarters in two vehicles to pack some of the belongings and they may come again on Wednesday, July 8 to pack what remains in the office.

Meanwhile, Professor Femi Odekunle, a member of the Presidential Advisory Committee Against Corruption (PACAC), has said the plans to replace Magu are already in motion. He made the allegation in a statement sent to journalists  in reaction to Magu’s invitation to the presidential panel.

Magu’s ordeal began a few weeks ago when the Attorney-General of the Federation (AGF) and minister of justice, Mr Abubakar Malami (SAN), recommended his removal to President Muhammadu Buhari. Malami, in a memorandum to the president, anchored his recommendation on several grounds “raging from diversion of recovered loot to insubordination and misconduct” by Magu.