By effizziemag On Jul 23, 2020
FILE PHOTO: A British Airways plane taxis past tail fins of parked aircraft to the runway near Terminal 5 at Heathrow Airport in London, Britain March 14, 2020. REUTERS/Simon Dawson/File Photo
0
Share 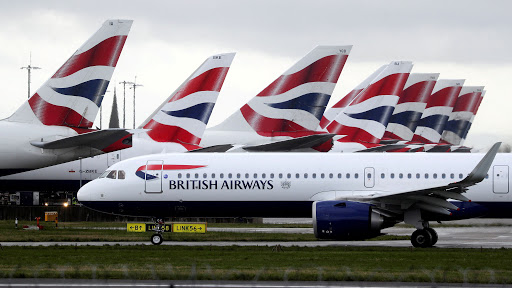 Thousands of pilots will vote over the next week on a deal negotiated between the airline and the British Airline Pilots’ Association (BALPA) over the past three months.

International Airlines Group (IAG.L), which owns BA, has faced heavy criticism after announcing plans to axe up to 1,255 pilots and up to 12,000 jobs in total earlier this year. The company warned in April it had run out of other ways to save cash as the pandemic has hammered its revenue.

The deal could see compulsory job losses limited to around 270 staff, according to the union.

Pilots are being urged to accept 20% pay cuts, which will eventually drop to 8% over the next two years and then towards current levels “over the longer term.” The package would also see voluntary redundancies, part-time working, and external secondments to limit costs.

Around 300 pilots would be placed in a “holding pool” on reduced pay, “ready to return to flying as demand picks up,” BALPA said in a statement late on Wednesday.

The union said the measures would avoid any controversial “fire and rehire” measures for pilots, but acknowledged BA had not accepted all of its recommendations to prevent any job losses. “Given BA’s intransigence we have put together the best package we can to save as many jobs as possible,” said Strutton.

IAG’s chief financial officer Stephen Gunning said on Thursday the company welcomed the union’s plans for a consultative ballot over the deal reached with the ariline. “This is in response to the COVID-19 crisis affecting the aviation industry,” he said. A further company statement will be released after the ballot closes.