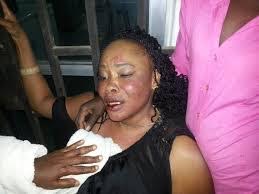 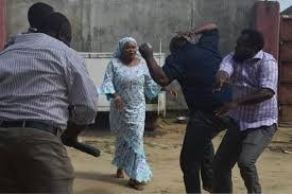 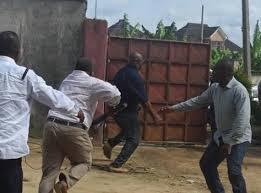 Church service at the Kairos Rhema Embassy in Uyo, Akwa Ibom state took an unusual turn when the wife of the church’s pastor disrupted service to inform congregants that her husband had been cheating on her with a church member and had even impregnated the woman.

When the pastor’s wife, Idongesit Ese, came into the church premises, she was barred from entering the auditorium, reportedly because her husband, Pastor Nsikanabasi Ese, suspected she would try to pull such a stunt.

As soon as she got out of her car and tried to get into the church premises, a group of men, reportedly hired by her husband, attacked her and the newsmen present. Witnesses told Premium Times that they saw one of the thugs slap Mrs. Ese. But she remained defiant and was able to make her way into the church premises from where she told her story loudly for those within the church to hear her. “I want every man and woman who has conscience in this church to ask my husband why he is doing this to me, why would he be sleeping with a young girl who came to seek counseling and prayers from him,” Mrs. Ese told church members.

“I caught my husband in a hotel having sex with Evelyn Etim. As I speak to you, Evelyn has given birth to a baby boy and she is living in Eket with my husband.”

Mrs Ese also accused her husband of domestic violence and showed them a photo of her with  bloodied face as proof, saying the reason for the assault was because she caught him in a hotel with the church member, Evelyn.

She said: “I want members of the church to know why I haven’t been attending programmes. Many people have been calling me to inform me that my husband lied that I traveled out of the country.”

People who claim to have spoken with Pastor Ese said the pastor was accusing the wife of having lied to him about her age and her level of education and has now filed for a divorce. Pastor Moses, who stood in as Pastor Ese’s father during the estranged couple’s traditional marriage, said that he doesn’t believe Pastor Ese was called by God.

Pastor Moses said:  “He didn’t give me any vital reason why he should divorce, he just said the woman is harsh. I don’t believe he is called by God. I have told him and his mother not to come to my house anymore.”

Pastor Nsikanabasi Ese is the same pastor who knocked down a customs officer while trying to evade duties check some weeks back.

First photo of D’Banj smiling at his newborn son, Daniel

Exclusive update: Man accused of killing banker over dented car in Rivers states his side of the story

IPOB releases names of militants allegedly behind killings in South-East