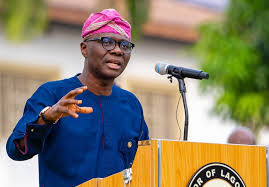 Governor Babajide Sanwo-Olu of Lagos state has granted approval for churches and mosques in the state as well as gyms and cinermas to resume full services.

He announced the approval at a press briefing on Saturday September 19. He said mosques can hold their prayers five times daily while churches can also commence weekly services.

Worship centers were restricted to one gathering weekly after they were allowed to reopen following lockdown to check coronavirus in the nation.

The governor also announced that cinemas, gyms, spas and recreational centres in the state can now reopen for business at 33 percent capacity which is one-third of their capacity.

“If they have gotten safety protocol clearance, from tomorrow, Sunday, they can resume.

Their resumption is only at 33 per cent of their capacity, meaning its only one-third capacity that you have at the various cinemas” the governor said