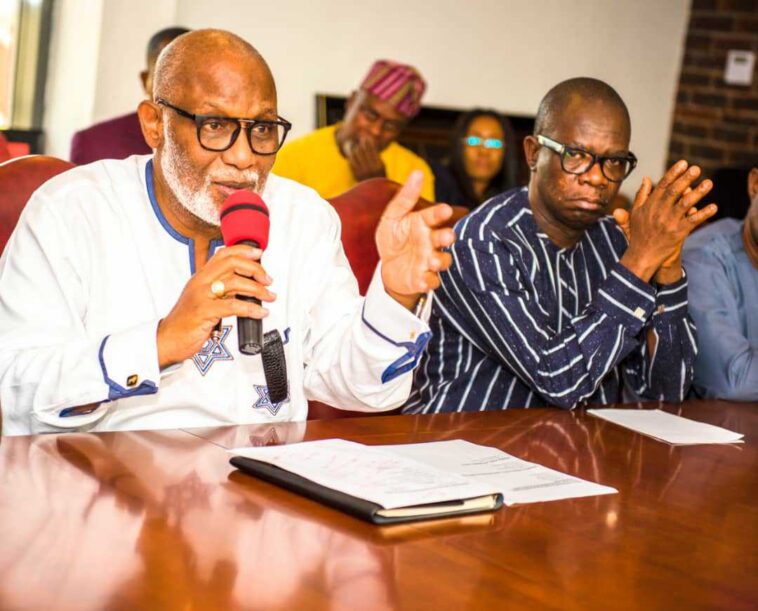 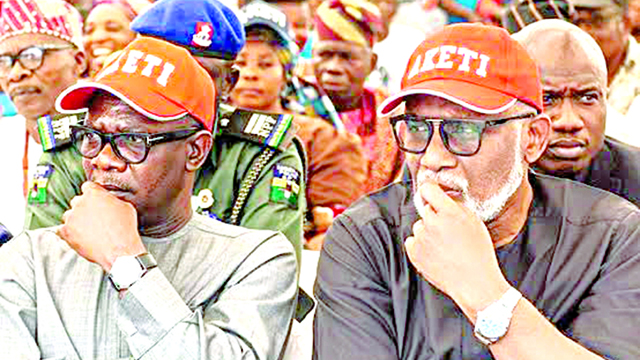 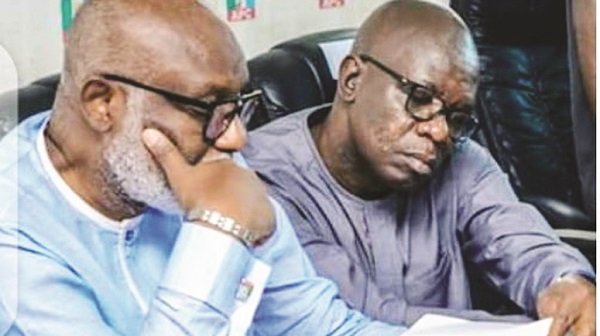 THE speculations that the Ondo State Deputy Governor Agboola Ajayi would dump the All Progressives Congress (APC) for the opposition Peoples Democratic Party (PDP) has been laid to rest.

Ajayi resigned his membership of the APC last Sunday and joined the league of aspirants jostling for the PDP’s governorship ticket.For months, the relationship between Governor Rotimi Akeredolu and Ajayi has not been rosy. Ajayi has been at loggerheads with his boss over the forthcoming governorship election.

Akeredolu lost faith in his deputy when he got to know that Ajayi was putting political structures in place to unseat him.Besides, the deputy governor was said to have been holding meetings with PDP leaders, including Sokoto State Governor Aminu Tambuwal to perfect his defection and contest for the PDP ticket.

When confronted by the governor’s supporters, Ajayi denied the allegation and blamed some political detractors for the development.

In spite of his defence, it was learnt that many chieftains of the party, particularly those from Ondo South Senatorial District, Ajayi’s constituency, had advised the governor to replace him for what they described as disloyalty and activities that undermine the interest of his principal.

A source summarised the situation this way: “Ajayi was no longer comfortable as there were many odds working against him in the government.

He has been boycotting government functions since March. The governor’s wife didn’t want him because she perceived him as a betrayer.

The crisis got to a stage that you can never see the wife of the deputy governor in any event organised by Mrs Akeredolu. So, the First Lady was not comfortable having Ajayi as her husband’s running mate again.

“Akeredolu never thought Ajayi would stab him at the back because he trusted him so much and relied on him in the administration of the state.

In fact, they are cousins. Akeredolu is disappointed. He said if Ajayi, his own blood could this to him, then he cannot trust any other close political associate.”

However, Ajayi’s defection and aspiration to contest the PDP governorship primary has increased the political enemies of Akeredolu ahead of the October poll.

The governor now has strong opponents within his party and those in the opposition eyeing his job. Akeredolu has reasons to worry. Ajayi is not a novice in Ondo politics. He is a grassroots’ politician. He started his political career in Ese-Odo Local Government, where he served as Supervisor for Agriculture; Works and Transport between 1999 and 2003, on the platform of the PDP.

He was appointed Caretaker Chairman of the council in 2004 and subsequently elected to serve as chairman between 2004 and 2007.

He was elected as a member of the House of Representatives on the platform of APC in 2007 and was in the house till 2011.

He is popular in his local government area. It is expected that his supporters would follow him to his new party.

Analysts say it will be difficult for Ajayi to deliver the southern senatorial district to the PDP because there are many APC chieftains from the zone.

They include Chief Olusola Oke (SAN), a 2016 frontline governorship aspirant; the immediate past state chairman of the APC, Chief Isaac Kekemeke; the Irele-born oil mogul, Jimi Odumayo and the Executive Director of Niger Power Holding Company (NDPHC), Ife Oyedele who hails from Okitipupa.

The Southern Senatorial District has remained the stronghold of the PDP since the return to civil rule in 1999. This explains why the party has decided to zone its governorship ticket to the district.

Despite the zoning arrangement, analysts believe that Ajayi is not likely to get the governorship ticket, unless the party gives it to win on a platter of gold, by consensus.He will slug it out with other formidable aspirants who are equally optimistic of grabbing the ticket.

Also from the district are the former Publicity Secretary, Banji Okunomo, as well as former Commissioner for Information and deputy governorship candidate in 2016, Olu Mafo.

For Ondo Central, former Attorney General and Commissioner for Justice, Eyitayo Jegede (SAN), an Akure man, is in the race. He was the party’s governorship candidate in 2016.

Ajayi’s defection has started creating ripples in the PDP. Other aspirants have vowed to resist any undue advantage to be accorded him by the party.

They have advised the party leadership to create a level-playing ground for all contestants to avoid implosion. For instance, there were speculations that the national leaders of the party are reaching out to other aspirants to step down for Ajayi to emerge as a consensus candidate.

It was learnt that the national leadership of the PDP had reached a deal with Ajayi, for Jegede to be his running mate on the condition that he (Ajayi) would serve only one term. But Jegede has denied entering into such an agreement.

The embattled deputy governor after defecting has vowed not to resign from the administration of Governor Akeredolu because he was elected on a joint ticket with the governor.

He argued that there is freedom of association and that this is not the first time a deputy will part ways with his boss.

Ajayi recalled what happened during the Obasanjo-Atiku presidency when the court ruled that there is freedom of association, saying he cannot be denied his tenure simply because he had changed political party.

Although there is no law that says he should vacate office because he has changed political platform, critics argue that Ajayi has no moral justification to hold on to office on the ground of disloyalty to the APC and his boss.

They are of the view that Ajayi should, as a matter of principle, resign as deputy governor just as he had resigned his membership of the party on which platform he came into office.

Lawyer and civil right activist, Monday Ubani said Ajayi is right by insisting that he cannot be kicked out from office because he has defected to another party.

Ubani cited the case of former Vice President Atiku Abubakar which got to the Supreme Court after he left the PDP to contest presidential election on the platform of the defunct Action Congress of Nigeria (ACN) in 2007.

He said the Supreme Court ruled that the then President Obasanjo had no right to remove him since he (Atiku) was also elected.

Ubani said the constitution states that the office of the Vice President, Deputy Governor will be vacant on condition of death, resignation, incapacitation or impeachment.

He said this aspect of the law should be reviewed to make it impossible for elected office holders that dumped the party that brought them into power to continue in office.

He said: “It is morally wrong for a politician whether at the executive level or the legislature to dump the party on which platform he/she was elected and still remain in office.

The legal practitioner argued that the votes that brought such public officers to office were cast for the political parties and not individuals.

Given the current provision of the constitution, the political parties are always short-changed by politicians who cross carpet at will.”

The former Vice President of the Nigerian Bar Association (NBA) said: “Ajayi has the right to remain in office but he would be frustrated by his boss.

The governor has lost confidence in him. All the privileges attached to his office could be withdrawn. More importantly, he won’t make any input into policy decision-making as he may not be allowed to attend the state executive council meetings where decisions are taken because he is no longer on the same page with the governor.”

He said the 1999 Constitution made the deputy governorship position a mere appendage of state power. He cited Section 193 (i) which stipulates that: “The governor of a state may, in is discretion assign to the deputy for any business of the government of the state including the administration of any department of government”.

He said this clearly makes a deputy governor an unnecessary attachment to the governor. I won’t be surprised, if Akeredolu treats Ajayi as inconsequential.”

On the likely effect of Ajayi’s defection on the re-election bid of Akeredolu, the governor’s spokesman, Segun Ajiboye, said the deputy governor’s exit would not affect his principal’s chances of winning the election. He described Ajayi’s defection as good riddance to bad rubbish.

Ajiboye said: “Ajayi was an extra weight in the Rotimi Akeredolu administration. When a vehicle is relieved of excess load, it will move faster; that is what has happened with Ajayi’s exit.

It is inordinate ambition that is pushing him. His brand of politics is to bring down his principal in order to rise.

The Akeredolu administration will not miss Ajayi. His departure will not affect the chances of the governor in the forthcoming election in October.

“The governor is very liberal and had entrusted him with sensitive matters and big projects, but in the end, he disappointed his principal.

The people of Ese-Odo where Ajayi hails from will tell you how he had short-changed them in the past three and half years.”

Ajayi will not be the first deputy governor to part ways with his boss in the Sunshine State. The state is reputed for deputy governors disagreeing with their principals.

A former deputy governor, Alhaji Ali Olanusi, defected from the PDP to the t  APC, two weeks before the 2015 general elections, after falling out with former Governor Olusegun Mimiko.

His prayers were answered as the appellate court annulled his impeachment. The court ruled that all the salaries and entitlements since the date he was purportedly impeached to be paid to him.

The power struggle between the first civilian governor of old Ondo State, the late Chief Adekunle Ajasin, and his erstwhile deputy, the late Akin Omoboriowo, was legendary.

The duo were elected into office in 1979 on the platform of the defunct Unity Party of Nigeria (UPN), founded by the late sage, Chief Obafemi Awolowo.

But, on assumption of office, they fell out. It began with the claim of Omoboriowo that he was a better candidate for governor, having scored more votes than his boss at the primary.

The genesis of the sour relationship was the refusal of Ajasin to handover to his deputy to act during a lengthy trip away from the state.

In 1983, Omoboriowo dumped the UPN for the defunct National Party of Nigeria (NPN), the ruling party at the centre then. He contested the governorship election on the platform of NPN against his erstwhile boss.

The NPN used federal might to ensure Omoboriowo’s victory. Results declared by the Federal Electoral Commission (FEDECO) on August 16, 1983 suggested that Omoboriowo won the election.

But his victory was short-lived as the Court of Appeal upturned the results before his inauguration and returned Ajasin as the governor.