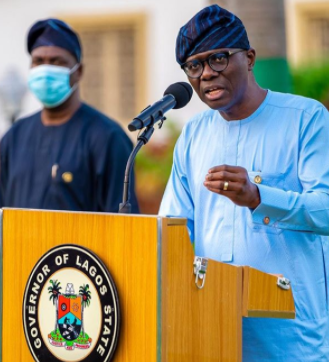 Governor Babajide Sanwo-Olu has announced the arrest of four police officers who brutally assaulted #EndSARS protesters in the Surulere area of the state on Tuesday, October 13.

Recall that during the protest, the policemen fired gunshots that killed a driver who was a bystander. The officers who are from the Area C command also arrested some of the protesters who were later released.

Speaking at a press conference earlier today, Governor Sanwo-Olu announced that the erring officers have been arrested and are facing orderly trial.

“Also, to mention that Lagos state is taking the issue of police misconduct very seriously, earlier this week, we all recall the incident that happened at the Area C command in Surulere. All four officers have been identified and are going through an orderly trial.

All the four erring officers whose name I will also mention have also been apprehended and are going through an orderly trial. They are Inspector Bagou Michael, Inspector Ekpoudom Etop, – Sergent Nnamdi Madura, and Sergent Akinyemi Benson.

“We have also set up a panel to look into all cases of police brutality and fatality and have set up a N200m compensation fund. I will make all announcements shortly. Once again, I apologise to any protester that has faced brutality during any of the protests days.”

Lovely photo of singer Seun Kuti with his partner, Yeide and their daughter