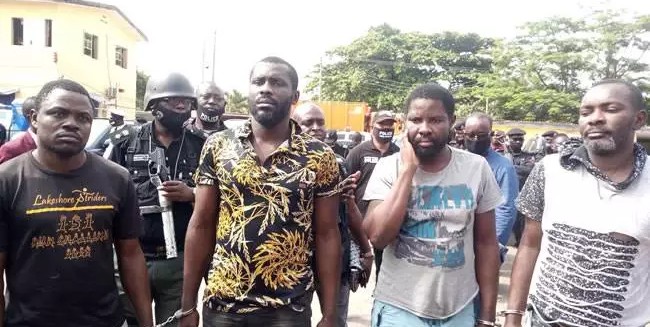 A kidnap syndicate, which specializes in abducting foreigners and traders on Lagos waterways, has been smashed by the police in Lagos following the arrest of four suspected members.

One of the abducted foreigners, a Syrian identified as Lungyn Camal, was also rescued by the police.

During investigation, it was discovered that some workers of the company where the Syrian works connived with the kidnappers. The foreigner, according to the Commissioner of Police, Hakeem Odumosu, was abducted on the waterways around Eko Atlantic in Lagos Island four months ago.

He disclosed that a month before the foreigner’s abduction, the suspects who came from Ondo State to operate, also abducted two other persons whose names he gave as Salisu Mansur and Christopher Chinda at Landmark Beach.

The suspects are Ayeni John, 45; Tijani Gafari, 38; Ojonla Oyetakin, 30; and Paul Orimisan, 38. One of them, Ayeni, a boat operator, claimed he was only hired to convey the Syrian to the gang’s hideout.

According to him: “Job (a fleeing gang-member) hired me. I met him at the Liverpool Jetty. I conveyed him and three of his friends to Lekki on March 15. We embarked on the journey at night. On reaching there, they went into Eko Atlantic and told me to wait for them, only to come back with a white man and hastily entered the boat. I did not see the white man’s face because it was covered. Job ordered me to take them to a creek at Epe. I only got N50,000.”

In a related development, Odumosu disclosed that the Anti-Kidnapping Unit of the command arrested three suspected members of a robbery and kidnap syndicate whose targets are prominent Nigerians.

The gang, according to him, also dispossessed victims of their vehicles, which were moved to Benin Republic for sale to ready buyers.

Addressing journalists yesterday, Odumosu said the trio of Ugochukwu Stanley, 25; Ayodele Ismaila, 28 and Elochukwu Nwabuwa, 28 “specialized in abducting high profile targets, dispossess them of their valuables and collect ransom before releasing them. The recent incident occurred on June 24, at about 2:00p.m. when one Denise Chukwueke, a white lady in Lekki, was abducted. They released her after ransom was paid. They took her gold chain, rings, phones and Range Rover. They were arrested at Falomo Bridge Ikoyi by the anti-kidnapping operatives and the stolen items recovered.”

All suspects, he said, would be charged to court.