Gwyneth Paltrow and Chris Martin raised a lot of eyebrows when they first announced their “conscious uncoupling” from each other in a newsletter posted to Paltrow’s lifestyle brand blog, Goop. Today, however, the breakup philosophy has “permeated the break-up culture” and is an ethos that Paltrow has now reflected upon in a personal essay for British Vogue.

She opened the essay recalling the moment she realized her marriage to the Coldplay singer was over. “It was my birthday, my 38th. My ex-husband and I were tucked away in the Tuscan countryside, on a hill in a beautiful cottage with a view of the forest,” she wrote. “Fall was coming; the leaves were just loosening their grip on bright green. Inside, the cottage was perfectly appointed in the way you dream of for a birthday trip: cosy living room with a fireplace, kitchen table overflowing with spoils from the farm nearby—peaches, tomatoes on the vine, basil, eggs. I don’t recall when it happened, exactly. I don’t remember which day of the weekend it was or the time of day. But I knew—despite long walks and longer lie-ins, big glasses of Barolo and hands held—my marriage was over.” 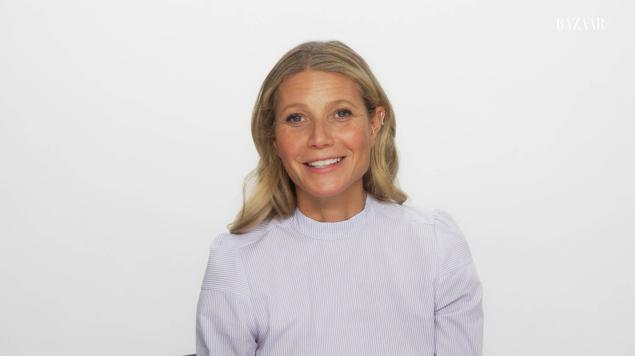 Scroll back up to restore default view.

Paltrow also reminisced about arriving upon this feeling of clarity toward her marriage. “What I do remember is that it felt almost involuntary, like the ring of a bell that has sounded and cannot be undone,” she wrote. “The inadvertent release of a helium balloon into the sky. I tried to quell that knowing, to push it far down. I tried to convince myself it had been a fleeting thought, that marriage is complicated and ebbed and flowed. But I knew it. It was in my bones.

“At first, I was moderately successful at turning the volume down on that knowledge. It would be years until we said the words aloud. But, that weekend, a dam had cracked just enough to hear the unrelenting trickle of truth. And it grew louder until it was all I could hear.”

Paltrow explained that she and Martin tried everything they could before ultimately calling it quits. “I had not grown up around a lot of divorce, and the divorce I had been privy to had been bitter, acrimonious, unending,” she wrote. “With all my heart, I did not want that.”

That was around the time that their therapist introduced the concept of conscious uncoupling. “Frankly, the term sounded a bit full of itself, painfully progressive and hard to swallow,” she wrote of her first impression of the breakup philosophy. “I was intrigued, less by the phrase, but by the sentiment. Was there a world where we could break up and not lose everything? Could we be a family, even though we were not a couple? We decided to try.”

While they navigated this new approach, Paltrow admitted that there were “great days and terrible days.” Still, the two remained steadfast in their goal.

Once the Goop newsletter announced their split, Paltrow recalled, “We knew that the piece would generate a lot of attention—a celebrity couple ending their relationship always does—but I never could have anticipated what came next. The public’s surprise gave way quickly to ire and derision. A strange combination of mockery and anger that I had never seen. I was already pretty tattered from what had been a tough year. Frankly, the intensity of the response saw me bury my head in the sand deeper than I ever had in my very public life.”

Despite the online ridicule, Paltrow and Martin seem to have figured it out for themselves. And now, as the Goop founder shared in her essay, she is even fielding questions about how they did it.

“It’s very different for every couple but, for me, it meant, more than anything, being accountable for my own part in the dissolution of the relationship,” she wrote. “There existed aspects of myself I was trying to heal through this relationship that I wasn’t honest with myself about. I had been blind, guarded, invulnerable, intolerant. I had to admit that and be brave enough to share it.”

She added that couples “need forgiveness in spades. … There are, of course, exceptions, but in most cases, a relationship is 50/50,” she wrote, “it’s just much more convenient to be the hurt one, so you never have to look at your own shit.”

Most of all, Paltrow encouraged couples to let go of spite and to hold onto the feeling of love that originally fueled that relationship. “You loved your ex once and you probably still do, so keep those great qualities of theirs close to your heart,” she wrote. “Which leads me to the final and potentially most radical point: it’s OK to stay in love with the parts of your ex that you were always in love with. In fact, that’s what makes conscious uncoupling work. Love all of those wonderful parts of them. They still exist, they can still make you feel the way you felt for that person. Rather than shutting them out, lean into the unfamiliarity of those feelings and explore them. We lose all the nuance of life when we make it all bad or all good.”

Finally, she added that despite their uncoupling, Martin was meant to be in her life. “I know my ex-husband was meant to be the father of my children, and I know my current husband is meant to be the person I grow very old with,” Paltrow wrote, referring to her now husband Brad Falchuk, a television producer. “Conscious uncoupling lets us recognise those two different loves can coexist and nourish each other.”

Martin and Paltrow officially divorced in 2016. Paltrow went on to marry Falchuk in 2018, while Martin has been romantically linked to actress Dakota Johnson.

Prince Harry is a ‘shadow of his former self’, says royal biographer

Battle For Edo – By Mayor Akinpelu

‘It was never about losing weight’: Adele on how working out helped her…

Britney Spears Accuses Her Family of Being Complicit in Conservatorship