US President Donald Trump on Wednesday, September 23, refused to guarantee that he will transfer power if he loses the US election in November.

When asked at a White House press conference whether he is committed to the peaceful handover of power upon a change of president, he responded: “Well, we’re going to have to see what happens.”

His statement elicited scorn from his Democratic challenger Joe Biden and even from within his own party.

When asked about Trump’s comment by reporters, Biden said: “What country are we in? Look, he says the most irrational things. I don’t know what to say.”

Republican Senator Mitt Romney reacted to Trump’s statement by stating that any hesitation on the core constitution guarantee was “unthinkable and unacceptable.”

“Fundamental to democracy is the peaceful transition of power; without that, there is Belarus,” he tweeted. 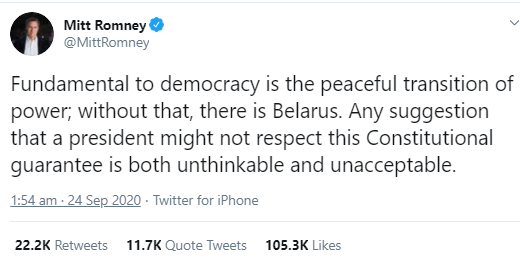 Leicester City coach, Brendan Rodgers reveals Wilfred Ndidi faces abductor surgery and could be out for up to 12 weeks