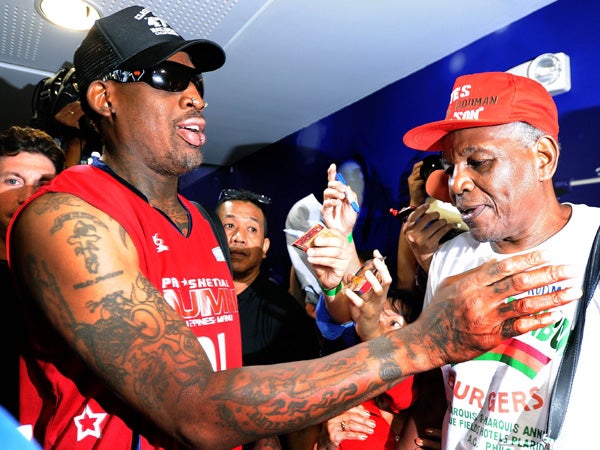 NBA Hall-of-Fame awardee Dennis Rodman and his father, Philander Jr., finally met face to face in the All-Star Basketball Challenge at SM Mall of Asia’s The Arena in 2012.

MANILA, Philippines—Philander Rodman Jr., the father of Basketball Hall of Fame member Dennis Rodman, died in Pampanga on Tuesday. He was 79.

Jasmine Rodman, the granddaughter of Philander, made the announcement on her Facebook page.

Darling Marie, one of the Rodman patriarch’s daughters, meanwhile, created a Twitter account in hopes of reaching Dennis and help them with the outstanding hospital fees.

Darling Marie also set up a GoFundMe account for the expenses.

Philander was an enlisted member of the United States Air Force and had a tour of duty during the Vietnam War.

The Rodman patriarch eventually settled in the Philippines in the 1970s leaving a young Dennis behind in the United States.

It was in Pampanga that Philander set up Rodman’s Rainbow Obamaburger joint that featured burgers with red, yellow, and green colored buns and fries in honor of his son’s multicolor hairstyle during his three-peat championship run with the Chicago Bulls in the late 1990s.

Dennis and Philander met during an exhibition game in 2012 at Mall of Asia Arena where the legendary power forward eventually acknowledged his father, six years after the five-time NBA champion denied the elder Rodman of a meeting.

“I don’t hate my father. Everyone here knows that my father lives in this country. I don’t hate him,” he said during 2012 trip.

NDDC acting MD passes out while testifying before House of Representatives Probe panel — Real or Fake?