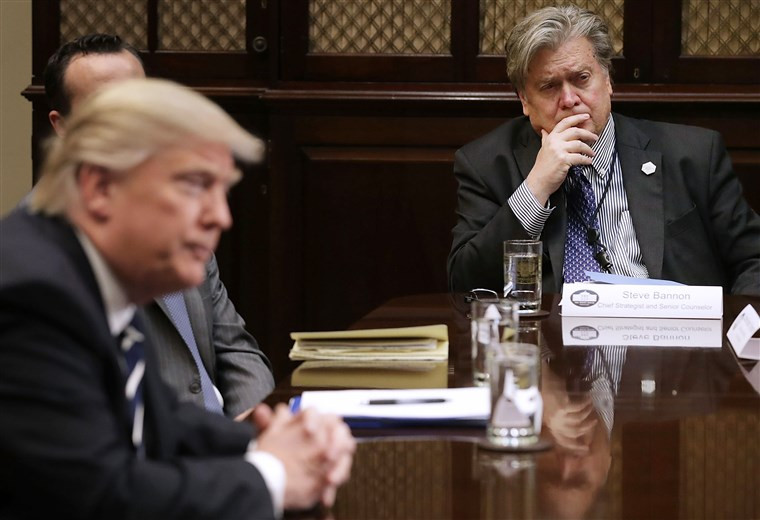 Steve Bannon, the former chief strategist of President Donald Trump, has been arrested and charged with conspiracy to commit wire fraud over a fundraising campaign to build a wall on the US-Mexico border.

The US Department of Justice said Bannon, who was President Donald Trump’s former campaign CEO and later his chief strategist in the White House, was arrested on Thursday morning, August 20, in Washington, D.C. on charges he and others allegedly made false representations about the “We Build the Wall campaign.”

Federal prosecutors alleged that Bannon, along with three others, “orchestrated a scheme to defraud hundreds of thousands of donors” in connection with the online crowdfunding campaign, which raised more than $25m.

According to the indictment, Bannon took at least $1 million from the ‘We Build The Wall’ campaign to secretly pay the group’s founder Brian Kolfage and cover hundreds of thousands of dollars in personal expenses.

The indictment states that all four defendants allegedly defrauded hundreds of thousands of donors in connection with the crowdfunding campaign, which raised more than $25 million.

“As alleged, the defendants defrauded hundreds of thousands of donors, capitalizing on their interest in funding a border wall to raise millions of dollars, under the false pretense that all of that money would be spent on construction,” acting U.S. Attorney Audrey Strauss said in a press release.

“While repeatedly assuring donors that Brian Kolfage, the founder and public face of We Build the Wall, would not be paid a cent, the defendants secretly schemed to pass hundreds of thousands of dollars to Kolfage, which he used to fund his lavish lifestyle.”

He was appointed chief executive of Trump’s successful presidential campaign in 2016. After Trump’s inauguration, Bannon became his chief strategist but clashed with others in the White House and was dismissed in August 2017.

Police offers N500, 000 reward for any information that would help in the re-arrest of Ibadan serial killer suspect, Sunday Shodipe