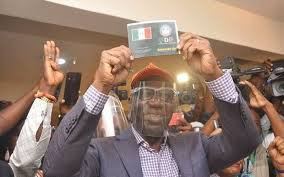 Governor Godwin Obaseki of Edo State has emerged the governorship candidate of the Peoples Democratic Party candidate for the September 19 governorship election in the state.

His emergence came after his closest rivals in the race, Ken Imasaugbon, Omoregie Ogbeide-Ihama, stepped down from the race minutes into the primary election.

With Obaseki’s emergence as PDP’s candidate, the governor will face his political rival Osagie Ize-iyamu of the All Progressives Congress (APC) and other candidates in the September 19 governorship election.

In 2016, Ize-iyamu was PDP’s candidate while Obaseki with the backing of his erstwhile political godfather, Adams Oshiomhole, contested under APC and won the election.