Holding of Hands in a relationship and their meanings. 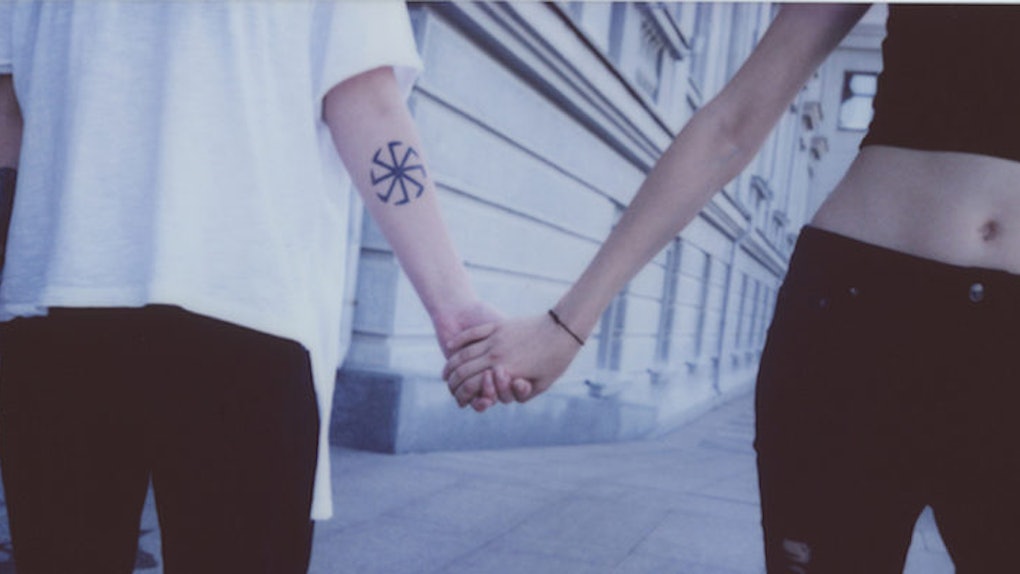 What Holding Hands Reveals About Your Relationship

As a normal human being with thoughts, feelings and stuff like that, you’re dying to know how he feels about you. But then, as a millennial who’s forced to play it cool, you’d rather gouge your eyes out than just ask him. So how the eff are you supposed to figure out how he feels about you? Well, how someone holds hands can reveal a lot about the relationship, for one thing.

Don’t you worry your pretty little heart because there just so happens to be a ~scientific~ way for you to figure that out without ever having to have the dreaded “talk.” You can figure out a ton about how your partner feels about you just by this alone.

It might be a no-brainer, but physical touch is really important in any kind of intimate relationship. “Connecting of hands is really, as humans, our first line of intimate touch,” says Dr. Joshua Klapow, Ph.D., a clinical psychologist and host of The Kurre and Klapow Show. “Holding hands is that front line of communicating emotions physically.” I spoke to Dr. Klapow and to Vanessa Van Edwards, expert in the nonverbal science of love and professor of the Udemy course “Body Language of Love and Dating,” about what your partner’s hand-holding technique says about their feelings for you.

When they’re holding your hand with your fingers just loosely interlaced.

Right off the bat, this may seem like a pretty insignificant hand-hold, but it’s actually pretty sweet. Klapow notes that this is the kind of touch new couples or couples-to-be may use when testing the waters of how they want to make a connection. “If you’ve never had any physical contact, this type of embrace is really a gentle, cautious, safe way of making a first connection,” he explains. Even if it’s not the first time you’re touching, it’s still a “safe connection” and way to show a gentle desire for contact.

Van Edwards sees it as a pretty nice gesture from your partner. This kind of grip usually happens in a social situation where it would be weird for the two of you to show PDA all over the place, so this is their way of showing you, and the rest of the party, that they’ve got you.

“In a social situation, in a way that’s kind of a sweet gesture because it’s saying, ‘I want people to see that we’re holding hands. I don’t need to have a super firm grip right now, but I do want to signal to people that you’re mine,’” Van Edwards explains.

Simply put, they’re showing you off.

When they wrap both of their hands around yours.

Scientifically speaking, the more we touch each other, the more oxytocin we produce. In Van Edwards’ words, oxytocin is the chemical that “makes us feel that warm-and-fuzzy, safe, belonging, wonderful, gushy feeling.”

Holding hands is the first step toward experiencing that bonding feeling with someone else. And the more of your hand your partner wants to hold, the more of that wonderful, gushy feeling they want to experience with you.

“When you have someone who wants to touch your hand with full skin-to-skin contact, like the full clasp or the double hold, literally what they’re trying to do is get more of that oxytocin, which is a desire for a deeper bond,” Van Edwards explains. In other words, this person likes you. A lot.

Klapow also notes that this kind of hand-hold is not super frequent, but it is common in certain situations, and that’s because it’s a very comforting touch. “It’s not a common embrace,” he says, “and it’s usually an embrace that conveys a strong emotion of caring.” Generally, people touch like this in order to convey strongly how much they care about each other, or in order to console each other when something is wrong.

When you’re walking side-by-side and your hands brush against each other, but you’re not actually holding hands.

The two of you are walking side-by-side, and your hands occasionally and awkwardly (or maybe not so awkwardly) brush up against each other, but you’re not necessarily holding hands.

On the other hand, Van Edwards sees it as just friendly. “It’s not intimate. It’s congenial, which is different than attraction or connection,” she says. Particularly if you’re a heterosexual pair — this probably feels awkward for women because they “prefer to interact face-to-face,” says Van Edwards. On the other hand (pun 100% intended), she notes that “walking side-by-side is actually quite nice for a man.”

So if you and this person are total buds, there is no need to be alarmed. But if you were hoping there was a little something more going on, this might be a good place to start.

When they hold your hand with a super firm grip.

As you can imagine, a partner who holds your hand with a tight, firm grip is really asserting their dominance over you. Especially in the beginning of a relationship. “It’s to convey power or intensity,” Klapow says. “It’s either a strong communication of intense feelings … or it can also be not nurturance, but reassurance of safety. It’s, ‘I got you.’”

Ultimately, he says “it communicates the intensity of feeling” from a partner — it’s not enough just to hold you, they want to hold you tight.

Van Edwards sees it as a dominant thing. If you feel like your hand is being “overly squeezed or pushed down” by your partner at the beginning of your relationship, “that is a very dominant gesture.”

“If someone’s squeezing very hard beyond just a reassuring ‘I’m here,’ that is a signal of ‘I want to be in control, I want to be dominant,'” she says.

When they lightly hold your hand with a sort of flimsy grip.

This particular hand-hold may seem like a pretty casual grip, but it’s actually pretty loaded. Like the fingers loosely touching, it usually happens in a public space where the two of you can’t engage in a ton of PDA.

Van Edwards calls it the “check-in” sort of hand-hold. “It’s [their] way of saying ‘I know you’re there, I got you.'”

It’s also their subtle way of “taking ownership of you” and showing the outside world that you’re theirs.

In terms of the chemical connection the two of you are experiencing, Van Edwards admits “it’s not a huge connection,” but she does think it’s still “quite sweet.”

When they clasp your hand fully with interlaced fingers.

This is the real deal. “That’s a classic ‘we are a couple,’” Klapow says, noting that it’s the next best thing to a universal gesture of love. “It spans across ages and generations. You see tweens, boyfriends, and girlfriends embracing this way. Maybe for the first time ever. And you see a couple who’s been married 70 years. When we really want to show that ‘you’re mine,’ … it’s a we-are-in-love embrace.” As I mentioned before, holding hands releases oxytocin in your brain, boosting you and your partner’s bond. The more of your hand your partner is trying to hold, the deeper the bond they’re seeking with you.

In this grip, their hand is really grasping your entire hand, from palm to fingertips. According to Van Edwards, this suggests they are literally trying to get more oxytocin and develop a deeper bond with you.

This person isn’t messing around. They want the real deal with you.

When they rest their hand on top of yours while the two of you are sitting or laying side-by-side.

The two of you are just chilling next to each other at the movies, and they take their hand and rest it on top of yours. What does that mean?

Van Edwards says it’s like the cuddling position of spooning. She explains that they’re similar in the sense that while you can spoon both ways, it’s typically the more dominant person in the relationship who’s the big spoon.

Even though we’re using the word “dominant” here, she explains it really has nothing to do with the word at all. “It’s not like, ‘I am trying to show dominance.’ It’s more like, ‘I want to be protective and I care about you,'” Van Edwards explains.

This person wants to be your protector.

When they touch your face with one hand, while their other hand holds your hand.

OMG you guys, this one is SO intimate.

As I already explained in a couple of the other hand-holding positions, the more touch there is, the more of the desire there is for a deeper bond. “Deep intimacy,” Klapow describes it. “Intimacy and sensuality — not necessarily with sexual intimacy as a goal.” He notes that touching a face is “as intimate as you can get,” but not always sexual. He points out that parents will touch the face and hair of small children as a loving gesture, but it’s probably not something you would do with a friend, even a very close one.

Certain parts of your body are also more intimate places to touch, especially the face and the torso. “To be touched on the face is a VERY intimate thing,” Van Edwards explains.

If a person holds one of your hands while they touch your face, they’re the MOST into you. But hey — you knew that one, didn’t you?

18 Shoe Models in the World.