PDP notifies INEC of nominees to replace Umahi and his deputy 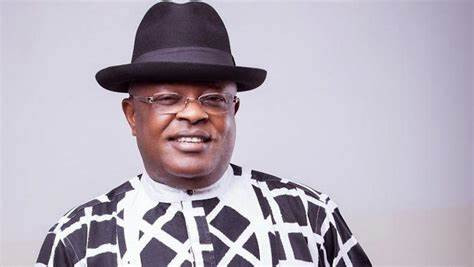 The Peoples Democratic Party (PDP) has announced that it has submitted names of its nominees to replace David Umahi and Eric Igwe, governor and deputy governor of Ebonyi, respectively, to the Independent National Electoral Commission (INEC).

Recall that Governor Umahi and his Deputy were sacked by a federal high court judge, Inyang Ekwo, who ruled that the constitution does not recognize transfer of ballot from one party to another.

Ekwo had also ordered INEC to receive from the PDP, names of persons to replace Umahi and his deputy, or in the alternative, conduct a fresh gubernatorial election in Ebonyi state in line with section 177 (c) of the 1999 constitution, as amended.

Iyorchia Ayu, PDP national chairman who spoke on the development on Tuesday March 8, said the opposition party has nominated Iduma Igariwe and Fred Udogwu to replace Umahi and Igwe.

“For position of deputy governor, the party is putting forward Mr Fred Udogwu.”

McDonald’s closes 850 restaurants in Russia, days after being criticized for taking a neutral stance on the Russian invasion of Ukraine

Minister of Labour, Chris Ngige, pulls out of presidential race, says he wants to…