The best desserts to make in an air fryer 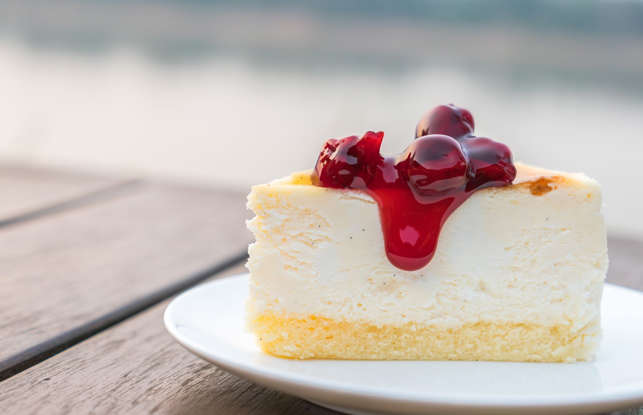 The best desserts to make in an air fryer

From cakes and pies to cookies, most dessert recipes call for the use of an oven to bake. However, as air fryers become a more popular small kitchen appliance, professional chefs and home cooks alike are finding ways to prepare their favourite sweet treats with this tool. Using an air fryer instead of an oven to prepare desserts comes with many benefits, too. You can prepare dishes faster, bring a unique crisp finish to the dish, reduce the baking time, use less energy and emit less heat into the home. Here are 20 must-try dessert recipes for your air fryer! 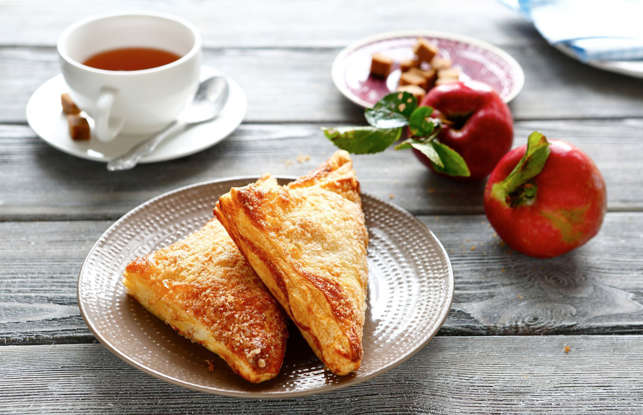 One of the key qualities of a delicious apple turnover is a light, crisp crust. This recipe from Cook It Real Good uses frozen puff pastry to prepare the turnovers alongside the apples, but you could prepare your own puff pastry if you prefer. After cooking the apples with maple syrup and cinnamon until they are stewed, all you have to do is place the apples within the pastry and pop everything into the air fryer. Just remember that if your air fryer is not non-stick, you will need to spray it before adding the turnovers. 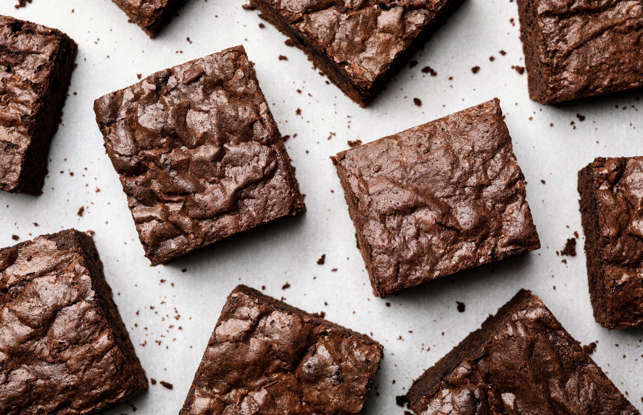 Everyone loves a brownie, and if you only have to wait 35 minutes to prepare and have them ready to eat—even better. Delish’s recipe follows the standard brownie preparation steps, including mixing the dry and wet ingredients separately and then stirring to combine them. The batter then goes into a cake pan and into the air fryer. One review noted adding peppermint oil for a chocolate peppermint flavour combination. Doughnuts can be a particularly tricky dessert to bake from scratch at home when following the traditional method of frying in oil. This air-fryer recipe from Delish makes the process a lot easier, and doesn’t call for any unusual ingredients. However, you will need to let the dough rise for at least an hour. Once the doughnuts are prepared, Delish suggests three glaze options: vanilla, chocolate and cinnamon sugar. 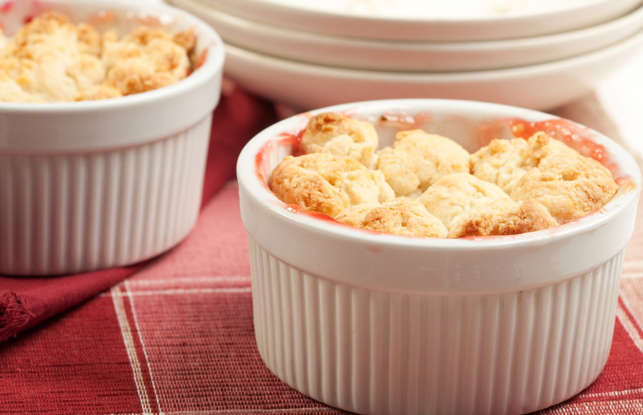 If you’re looking for an easy dessert to make for two, this cobbler is a great option! The Taste of Home recipe includes the standard ingredients of flour, butter, rhubarb and strawberries, but it also calls for quick-cooking tapioca and pecans. After the dessert is prepared in ramekins, the ramekins are placed in the air fryer to bake. 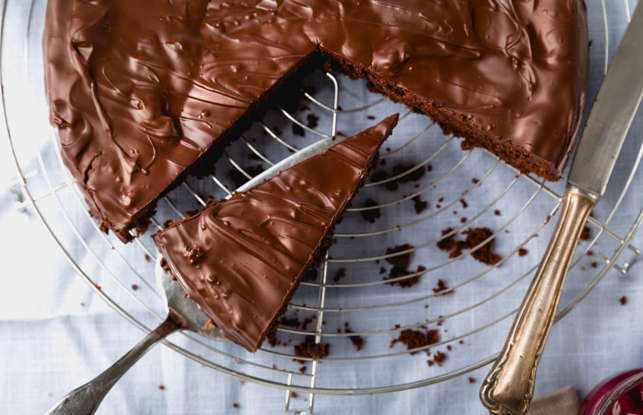 Cakes are often reserved for special occasions since the size can typically feed several people. The great thing about this Also The Crumbs Please recipe is that the cake is a little smaller, making it perfect for one family to enjoy. You can make the cake single-layer or make it multi-layer and fill it with chocolate frosting. Be sure to cover the pan with tin foil to prevent the air fryer from drying it out. 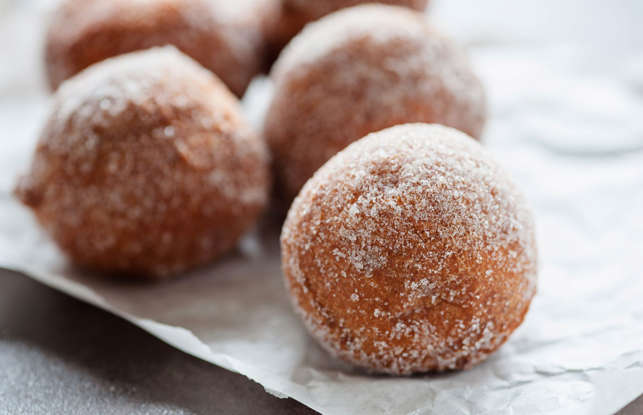 Doughnut holes are a great dessert to prepare when you’re craving something sweet, but don’t want a full-size doughnut. This Eating Well recipe tastes like a traditional cinnamon-cake doughnut hole, but it uses less oil and fat. 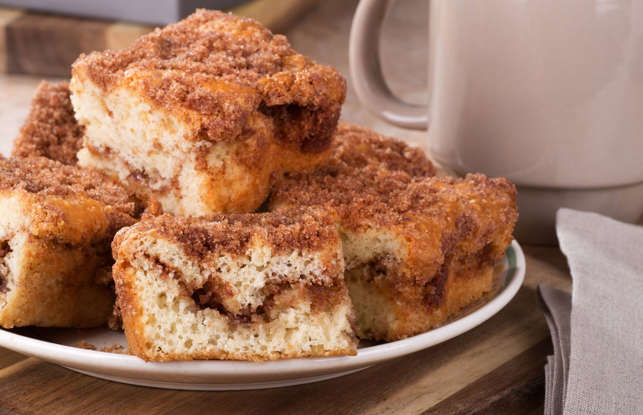 The downside of making a dessert from scratch is that you wind up with tons of dishes to clean when you’re done. Luckily, this Fork to Spoon air-fryer coffee cake recipe only requires one dish for all of its ingredients to be mixed in together. It is recommended that you use a thinner cake pan so that the air fryer can cook the centre. 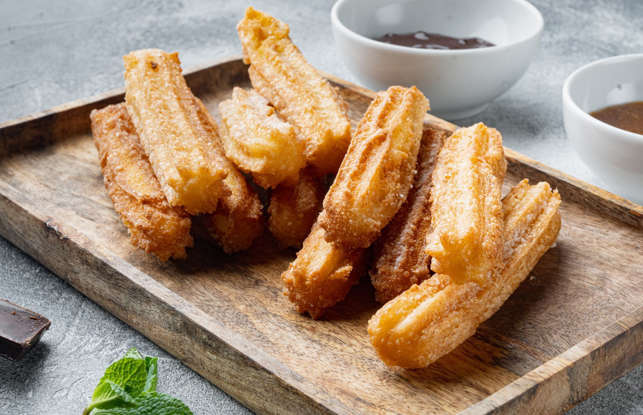 Like doughnuts, churros are typically made from dough that is then deep-fried to become crispy outside. However, they can also be made in an air fryer without the need for excess oil. Plated Cravings’ recipe calls for pretty standard ingredients that you likely have in the pantry and fridge—flour, sugar and butter, to name a few. However, what you might not have, that you’ll need, is a piping bag with a star-shaped tip that will help you get your dessert into the signature churro shape. Once out of the air fryer, churros should immediately be rolled in cinnamon sugar and served warm alongside chocolate sauce, caramel, whipped cream or Nutella. 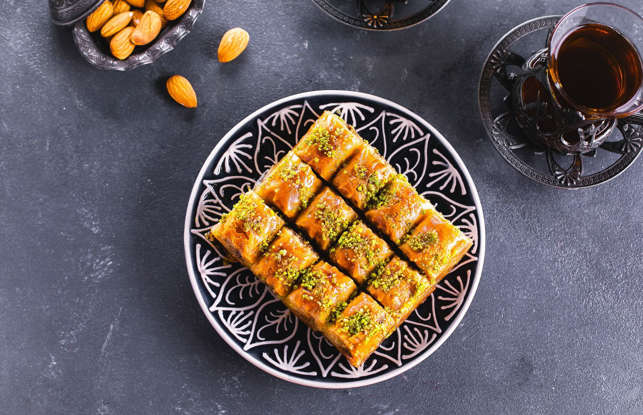 Baklava is a popular dessert in Mediterranean countries. The recipe includes filo dough, honey and some nuts—in the case of Entertaining with Beth, pistachios and walnuts. This air fryer recipe is pretty easy to make if you follow the steps, and you’ll have baklava bites—perfect for when you need a small sweet treat. You can serve the bites with honey for extra sweetness, but be careful with the honey before air-frying as you don’t want burnt honey to stick on your air-frying pan. 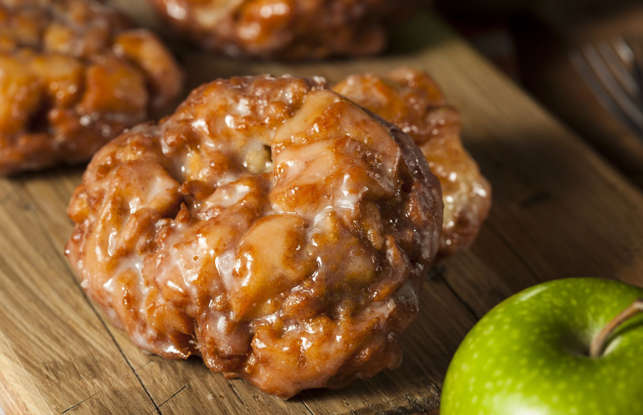 This Taste of Home recipe for air-fryer apple fritters has received numerous rave reviews, with many stating that they will certainly be making them again. This dessert is healthier than the traditional recipe but just as delicious. The recipe includes pretty common ingredients, including flour, sugar, butter and Honeycrisp apples. 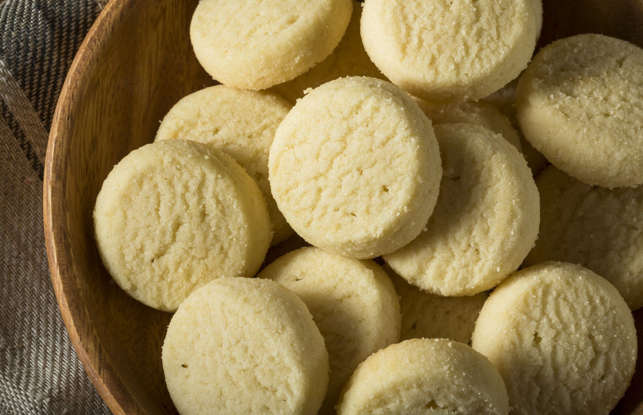 These shortbread cookies from Air Fryer Yum are made from just three ingredients, flour, butter, and powdered sugar. After mixing the ingredients with a stand mixer or hand mixer, put the dough to chill in the fridge before cutting it into discs and putting in the air fryer. You can make several variations of the recipe, including lemon, chocolate chip, and matcha. 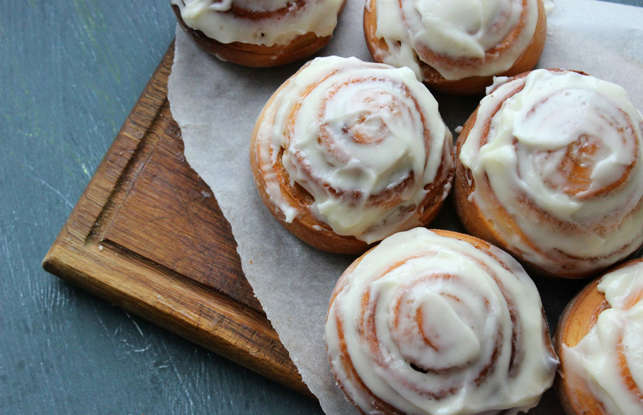 Even professional bakers turn to store-bought ingredients from time to time. If you’re craving cinnamon rolls, but don’t have time to prepare the dough and let it rise, you can turn to a refrigerated crescent roll tube, as suggested in this recipe from Delish. After the cinnamon-sugar filling is paired with the crescent roll dough, the rolled-up pieces are placed in the air fryer to bake. The cream cheese glaze is added while the rolls are still warm. 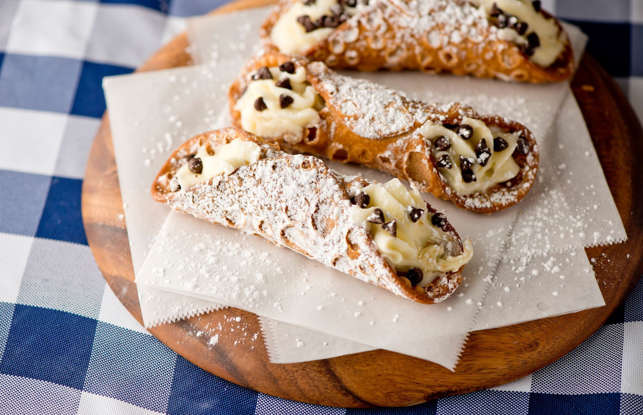 Thanks to the accompanying video, this Tasty recipe for air-fried cannoli is easy to follow. It calls for relatively common ingredients—flour, butter, and powdered sugar—but it also requires ricotta cheese and cannoli molds. When the dessert is complete, you can choose to sprinkle the chocolate-dipped edges with chocolate chips, sprinkles, pistachios, or an orange peel.

Warning: Your mouth will be watering just looking at a picture of this recipe. This air-fryer cheesecake recipe from Christina Morales, featured in the New York Times, takes half the time to prepare compared to a traditional recipe. After using a mixer to combine the cream cheese with other wet ingredients, pour the filling over a graham cracker crust, and place the pan in an air fryer. You can add a cherry filling or choose another fruit or sauce to top it off. 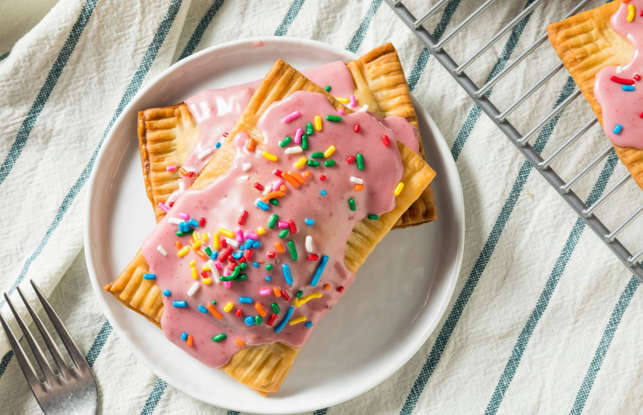 If you haven’t made pop tarts at home yet, prepare to be amazed. This air-fryer pop tart recipe from Show Me the Yummy uses pre-made pie crust, but you could follow a standard pie crust recipe and make it from scratch. All you have to do is put strawberry jam inside the pie crust, place it in the air fryer and top with a homemade cream glaze. To allow the frosting to harden, you will want to place the warm pop tarts in the fridge before serving. 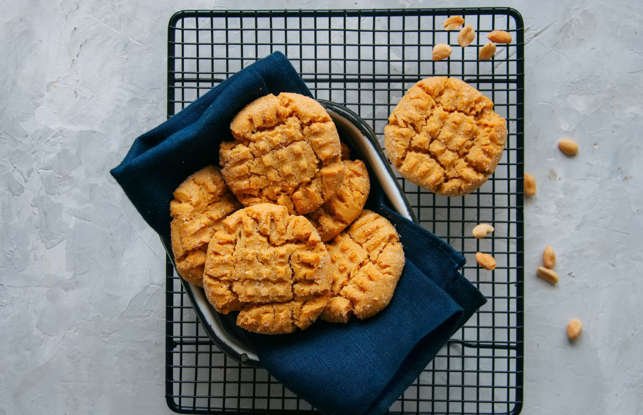 These peanut butter cookies are easy to make in an air fryer, but they’re also great for those following a gluten-free diet as they have just three ingredients: peanut butter, eggs, and sugar. The Sparkles to Sprinkles recipe notes that cashew and almond butter might not mix as well, so it’s best to stick with peanut butter. For variations, you can add chocolate chips and nuts or spread jelly on one side and stick two cookies together. 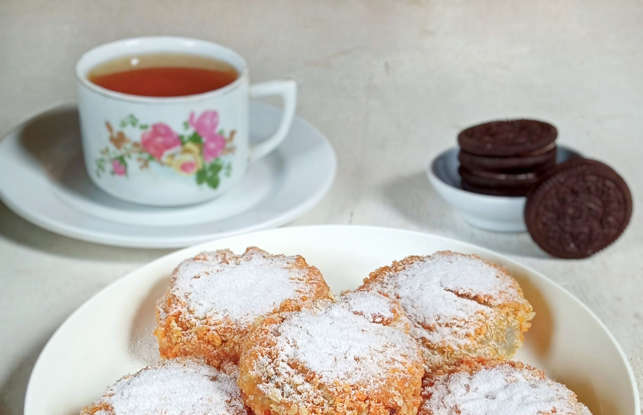 Oreo fans will flip for these air-fried Oreos, healthier than deep-fried Oreos but more indulgent than the cookie on its own. This recipe from Food Network uses doctored pancake mix to make a sweet batter for the Oreos to be dipped in before going in the air fryer. The batter should have the consistency of thick cake batter and be able to coat the Oreo without dripping off. 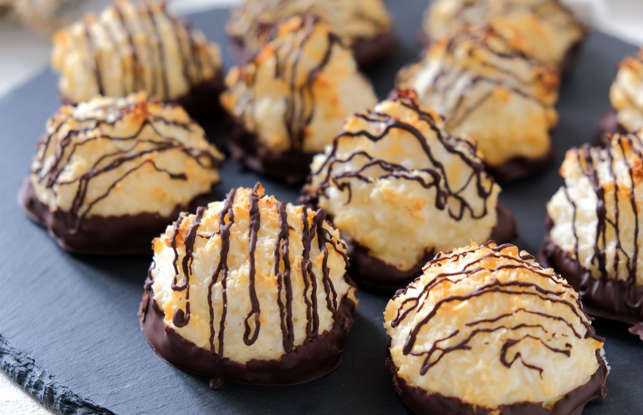 The benefit of preparing coconut macaroon cookies in an air fryer is that the coconut edges get an extra crispy touch. This recipe from Allrecipes involves preparing the macaroons and placing them in the air fryer, then dipping them in warm chocolate. You can add Rice Krispies to the coconut mixture for extra bulk and add nuts or sprinkles to the chocolate layer before it cools. 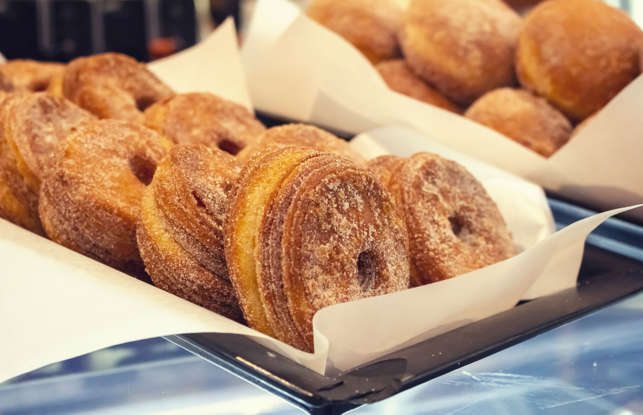 The Cronut was invented in 2013 by a French pastry chef based in New York City. Since then, more bakeries have taken on the recipe, and now some are attempting to make this dessert in an air fryer. This recipe from Organically Blissful is made with crescent sheets and cinnamon sugar. It is recommended that you coat the Cronuts with a beaten egg to help the cinnamon sugar stick.