The National Assembly display of shame! 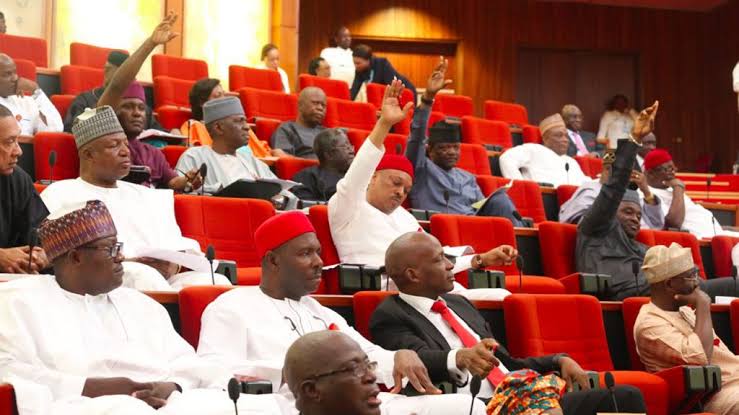 The evolution of cameras has made the public court one of the most reliable sources of undiluted justice for the common man, and has also provided unimpeachable opportunities for proper analysis of controversial events. Festus Keyamo, SAN, the Honourable Minister of State for Labour, has been a leading beneficiary of justice from public courts for over two decades – from the sensitive cases he had handled as a young lawyer and activist to the extremely delicate ones of latter years as he rose through the ranks to becoming one of Nigeria’s prominent lawyers that became a SAN before age 50 . And if not for the cameras this time again, many of the twisted versions of verbiage and reasons advanced to save the face of the legislators in the recent saga of requesting control of the 774,000 jobs under the purview of the Minister of State would have gained undue traction and relevance.

Some critics have described the Minister’s action as brash and disrespectful, while some others have even branded the event as some form of melodrama in which the Minister was described as one playing to the gallery. But anyone with genuine concern for justice that has seen the different versions of videos on the unfortunate event would get a grips of how the legislator’s betrayed their percuniary interest, whether for personal or political cause, in a puerile bid to browbeat the Honourable Minister.

There are, definitely, irrefutable evidence, thanks to the cameras, why the legislators, made up of the Lower and Upper Chambers, cannot absolve themselves after the disgraceful event, and why by their dishonourable actions, they have projected the Honourable Minister, Festus Keyamo, SAN, as one of the few men in Buhari’s government, who genuinely seek to protect the interest of the masses, but who also cannot be coerced to renege on the core values that have defined his activism and brand of leadership, whether as a private legal practitioner or as a public servant.

The invitation of the Minister to the National Assembly for an Interactive Session comprising members of the two legislative houses was, for all intent and purposes, abrubt and designed to suddenly pressurise the Minister to yield to their whims and caprices, to re-order the design of the 774,000 jobs project, and possibly to compel him to succumb to utter legislative control by both Houses. For a Minister that had gone public with the 774,000 jobs project and had coveted a transparent implementation trajectory in different fora, which had been well received, the imperious and cavalier posture of the legislative arm of government in the guise of supervision smacks of selfishness rather than national interest.

It was, therefore, not surprising that the legislators displayed crass incoherence of their strategy and uncoordinated communicative style, when the Minister began to caution them on their powers and roles. Some of the legislators did not only aggravate the shouting match, they were also seen in the videos traversing seats while jostling and lamenting their confusion in anger, and evidently whispering as well as yelling out directives to the Committee Chairman. And in the din of the confusion, presented different point of views that made the entire event mortifying.

The shocking revelation by the legislators that the NDE’s Director General is not being carried along on the project, and his purported confession that he is oblivious of how members of the Selection Committees for the 774,000 jobs project were selected only betrays the selfish sentiments exhibited by some of the legislators. You can tell from the video that at this point the legislators had exhausted their strategy and were struggling arbitrarily to hold on to broken straws for survival. Those who had earlier watched the Minister enumerate the different stages and strategy for the 774,000 jobs project on T.V. would, without any iota of doubt, scorn the disloyalty of the DG.

The show of shame put up by the legislators got more embarrassing when they suddenly requested that the public hearing, primarily designed to expose corruption, transform into an Executive Session. Their reference to and interpretation of section 88 of the Constitution was refuted and clearly addressed by the Minister to justify his position on the need to speak before the cameras. Not only did the shouting match that ensued upon the legislator’s request not to allow the cameras disrupt the event, it also revealed to the entire public that the legislators were up for something egocentric and self-centered — something completely short of public interest. It was a half-witted attempt at self- immolation by a gang of legislators. If they ever thought that they could tear off the toga of corruption in the Lower and Upper legislative House by their actions, they failed woefully.

Their subsequent attempt to project the motive of providing guidance and direction for the 774,000 jobs project in order to curry some sympathy from the public came a bit too late, and was certainly too lame to excite the interest of the public. Here is a situation of a Minister who had received express order and directive from Mr President to undertake and supervise a special project. The legislators should have been smart enough to understand the basic underpinnings that define the role of the Minister in the project, rather than engage in grandstanding in a bid to play legislative politics for pecuniary gains.

It is desirable to address the issue of the lack of emotional intelligence on the part of the Minister at the point the debate gradually turned into some form of altercation. Some critics have argued that the Minister’s tone and gesture was, to say the least, disrespectful to the distinguished Senators and Honourable Members present. This line of argument may be tenable if this was the Minister’s posture at the inception of the hearing. The situation became awry at the point the legislators started raising their voices from different ends and tried to intimidate the Minister. He therefore had no option but to raise his voice for his position to be heard clearly and to avoid being coerced to capitulate under undue pressure from the legislators. Two wrongs can’t make a right, they say, so it could be concluded that both parties only used the event to emphasise the fickleness of human nature.

It is therefore not surprising that the press conference held by the legislators to defend their actions and position during the public hearing failed to provide justice for their unbridled inquest into the 774,000 jobs project. If for anything, their actions only helped to convince the public that the Minister’s strategy not to play politics with the project offers a better alternative to the Nigerian unemployment predicament.

It appears the matter may be resolved politically. That would not be unusual in our kind of democracy. But the final outcome will never be able to erase the show of shame displayed by the legislators having failed to provide justice for their unbridled inquest into the 774,000 jobs project.

As Coming to America 2 is about to be released later this year, here is what the stars look like now.