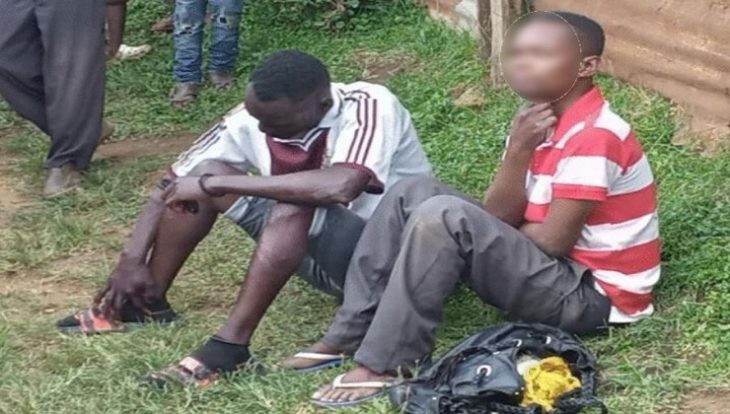 Two men were arrested in Angwete Village in Kakamega Town, Kenya on Friday morning while engaging in a homosexual act.

Nyumbi Kumi Initiative elder, Reuben Otiende disclosed that they had suspected that Wanyeso alias Gili was a homosexual after he recently “committed the crime with a neighbour’s son”.

Residents of the community broke down Wanyeso’s door after they saw a non-native male person identified as Caleb Andani, enter his house. The duo who were caught red-handed in the act, were beaten to a pulp before the police intervened.

K2TV reported that Wanyeso is a divorcee who kicked his wife, Grace Khavetsa out of their matrimonial home last year. The former couple are blessed with three children.

“We are urging the landlord of the house rented by this man (Wanyeso) to send him packing. We cannot tolerate homosexuality in this area. These are the men who will spoil our children.”

Kakamega Central OCPD David Kabena also disclosed that the suspects will be arraigned once investigations are concluded.