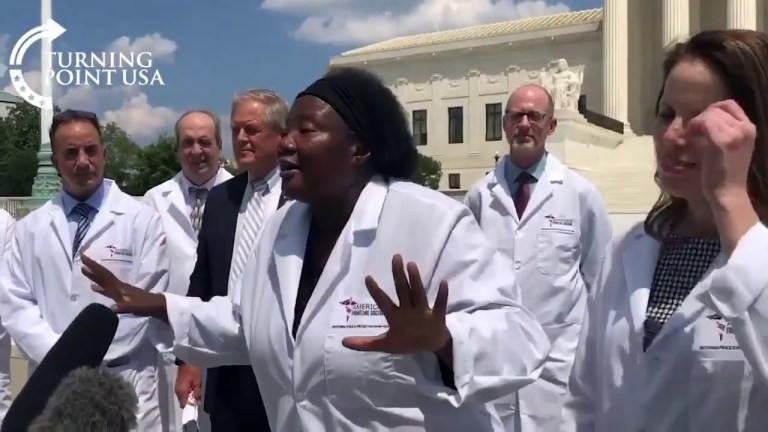 US-based doctor, Dr Stella Immanuel has taken a prominent spot in social media trends following a news conference she featured in at Washington.

Dr Stella who insisted that antimalarial drug; hydroxychloroquine, zinc and antibacterial drug, Zithromax were effective in the treatment of Coronavirus, accused her colleagues and pharmaceutical companies of cover-up.

Sharing her experience of managing over 350 Coronavirus patients, the Nigerian-trained medical doctor stated that no patient has died under her care, including those with underlying medical conditions like diabetes, asthma and others.

“I went to medical school in West Africa, Nigeria, where I took care of malaria patients, treated them with hydroxychloroquine and stuff like that.

“For the past few months, after taking care of over 350 patients, we’ve not lost one. Not a diabetic, not a somebody with high blood pressure, not somebody who asthma, not an old person.

“We’ve not lost one patient. And on top of that, I’ve put myself, my staff, and many doctors that I know on hydroxychloroquine for prevention because by the very mechanism of action, it works early and as a prophylaxis.

“The study that made me start using hydroxychloroquine was a study that they did under the NIH in 2005 that says it works.

“I know you’re going to tell me that you treated 20 people, 40 people, and it didn’t work. I’m a true testimony. So I came here to Washington DC to tell America nobody needs to get sick.

“This virus has a cure. It is called hydroxychloroquine, zinc, and Zithromax. I know you people want to talk about a mask. Hello? You don’t need a mask. There is a cure.

“I tell all of you doctors that are sitting down and watching Americans die. You’re like the good Nazi … the good one, the good Germans that watched Jews get killed and you did not speak up.

“If they come after me, they threaten me. They’ve threatened to … I mean, I’ve gotten all kinds of threats. Or they’re going to report me to the bots.

“You can report me to the bots, you can kill me, you can do whatever, but I’m not going to let Americans die.